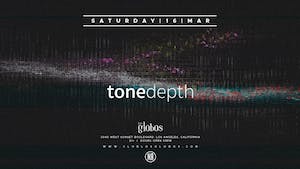 Noise Revolt is extremely proud & honored to announce the official L.A. show, as we introduce and showcase Tone Depth (fryhide, Afterlife / Canada) at Los Globos as a part of his U.S. debut tour come March 16th.

Both Tone Depth and the fryhide label embody the ethos; impact based, heart centered & both heart driven sound and curation that has facilitated the growth and evolution of Noise Revolt and the NR community of the years. We are proud to see the inspiration and development of other such communities all over socal, helping to unite the unique and powerful scene it has grown to today.

Tone Depth has been redefining his sound and putting the melody back into his music. Now, fluidity and simplicity reign. With Tone Depth’s focus on music at an all-time high, there is a newfound desire to innovate with the raw, live-recorded elements that are the keystone to a sweeping new sound. This progression means less polish and more soul. Less deconstruction and more organic growth

We could not be more honored and grateful to have been selected to host this booking, and we are more than excited to debut this act for ours and the greater LA techno community. Get ready for a night of full immersion and acclaimed progressive techno sounds.

“I want my music to invade your mind and provide a journey where you can travel the globe with your ears open and eyes closed. Music has the unique ability to suspend belief, and my goal is to paint a scene with sound.” On that matter: “Techno needs to be taken somewhere by surprise. Certain sounds

mark what we perceive as techno, but they’ve been used a million times. I’m looking forward to more air and ambience. To get back into the textures and the live instruments that can give it so much depth. More music with vocalists. Music that juxtaposes genres and will last the test of time.”

If you don't know Tone Depth, or the fryhide label, then get ready to be introduced to a seriously high caliber producer and DJ - as this gentlemen is poised to be one of the main driving forces behind the development and progression of the progressive techno genre around the world this coming year. All the giants are playing out his tracks, and fryhide is consistently topping all the charts...